If you come from backend world and you have worked with C# or Java you probably used something similar. They remind of attributes in C# or annotations in Java. While they have similarities, they are not exactly the same thing. In JavaScript they are not only metadata. They represent declarative way of adding properties and behavior to prototypes, constructors or even object functions.

When applying decorators to declaration we use the form @functionName, where functionName represents a function. That means that in JavaScript decorators are implemented in form of functions. Those functions will be called at runtime.

It is especially relevant to emphasize that decorators are proposed feature for future version of JavaScript. They are currently in stage 2 proposal for ECMAScript. Hence, they are an experimental feature in TypeScript which needs to be enabled via tsconfig.json:

or via parameters through tsc CLI.

target parameter is either constructor function or the prototype of the class for an instance member, propertyKey is the name of the method, descriptor is the property descriptor.

As a result of executing previous code we get the following output: 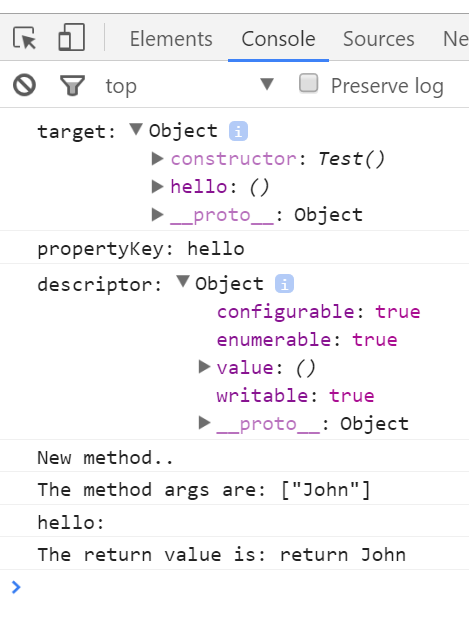 You can assign multiple decorators to a declaration:

Here is the output:

As you can see, expressions for decorators are applied from top to bottom, while results are called as functions in reverse order – from bottom to top. It is important to notice that we got the output here without making an instance of Test class and calling the method appendTextToName explicitly. That is because our decorator functions (a, b, c ) are executed at runtime.

Lets sum up what we have learned about decorators so far:

You can find the code at https://github.com/Ibro/typescript-decorators